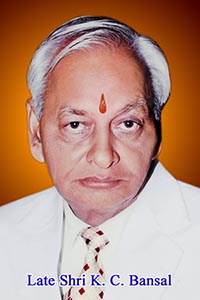 Shri Kailash Chandra Bansal was born on 3rd Jan. 1936 in small village Suroorpur, Distt. Meerut , U. P. In those days it was very difficult to afford the fee for higher education and therefore he worked hard to earn his livelihood and it was only possible for him to arrange the fee to join diploma in civil engineering from Lucknow after his marriage. After completing his degree, he joined as Engineering in the Department of irrigation in 1970. He desired to do something new but due to limitations in service he left his service in 1985 and started his own Construction Business in the name of Bansal Construction Works. Although he got small works in beginning but due to his hard work and quality of workmanship he was able to participate in works of higher value. Some of the Landmark build by him are buildings of Scouts and Guide, Manav Sangrahalaya, Housing Board Colony at Manisha Market to say only a few.

He believed to help others and gave the message to remain united and called all his brothers and relatives to join him. His able guidance helped company to progress in leaps and bounds and in the year 1999, to help the children and to provide quality higher education he formed the Shriniwas Education Society and started Bansal Institute of Science and Technology, Bhopal in year 2000, Bansal  College of Engineering, Mandideep in 2001, Bansal College of Pharmacy and MBA in year 2003, Sushila Devi Bansal College of Tech, Indore in 2005, Sushila Devi Bansal College of Engineering, Indore in 2006, BIRT, Bhopal in 2007 and BIRTS was started in 2008 with the vision to strive , to seek, to find and to achieve paramount state in technical education and to develop an advance research institute in India. He aimed to explore new educate children who can not afford education so a charitable school “Suchila Devi Bansal Public School”, Bhopal was started in 2009 to fulfill his desire.

His hobbies were farming, reading books and viewing good family movies. He departed while working on the site by heart attack on 7th Aug. 2007.